4 helpful keys for a perfect ball toss. No more frustration.

True story. I do tennis camps for adults in Spain and before players arrive we send out a form asking for their weaknesses and what they want to work on. Undoubtedly it comes down to a consistency problem off either wing or the uncontrollable Serve!

Now to be clear, we start looking at the serve the first day & everyday until players leave. The serve is certainly the hardest stroke in tennis and can break down on a dime.

The 2 main culprits I see with adult beginner & intermediate players looking to improve the serve?

At some point I pick my spots…

At some point I have to pick my spots as I only have only 1 week with players. And the reality is they can get the ball in the box with the wrong grip – albeit with limitations on variety.

So I focus mainly on the ball toss to have a shot at consistency.

The ball toss is really important. You need to understand this. It’s a huge reason serves aren’t consistent.

It needs to be developed like any other part of your game!

Kids who learn & grow with the game spend years practicing to get the ball toss consistent. Ideally if you were able to hit all types of serves you’d want the toss position in the same place so your opponent doesn’t know what’s coming (topspin, kick, slice).

Now´s the time to get graceful

So for beginner & intermediate players it’s important to practice getting the ball toss out in front directly off that left front toe provided that toe is at a 45 degree angle.

Stop thinking how powerful your serve has to be. Just relax and remember you go from slow to fast. You start very relaxed and only explode on contact. 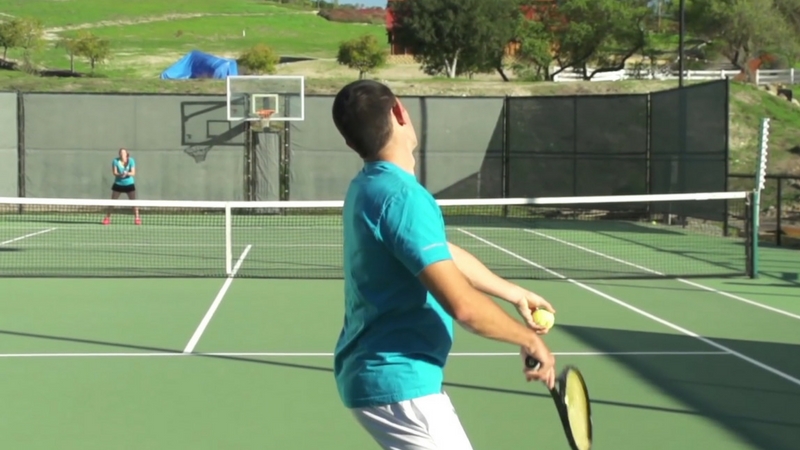 2# Lock the elbow, extend the arm and hold up

Place the arm & hand loosely on the left thigh (right handed players), lock the elbow and extend that arm straight up above your head, hold as long as possible, keeping your eye on the ball. Reach upwards with a full extended arm in order to clear the net.

A bend in the elbow may toss the ball behind you. 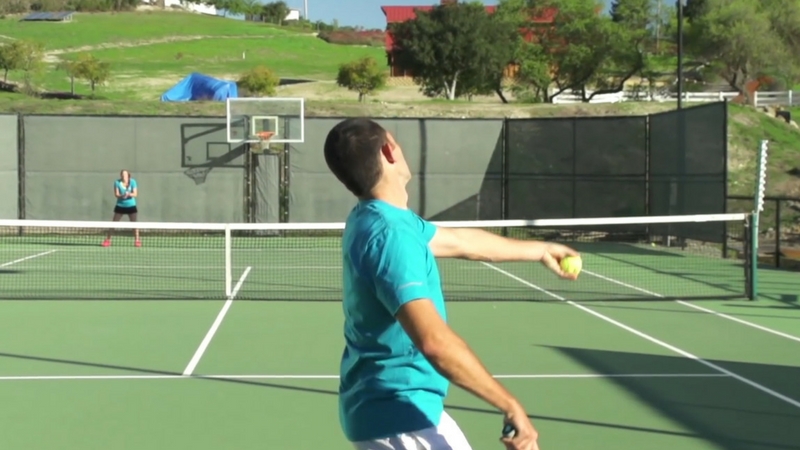 Closing the fingertips or jerking the wrist at all right before releasing the ball may also toss the ball backwards. Work on releasing the ball as gracefully as possible with focus on getting that hand open and arm fully extended. No one is a better reference to a graceful tossing motion with eyes plastered on the ball quite like Roger Federer. The ball should drop (if you didn’t hit it) right inside the baseline. 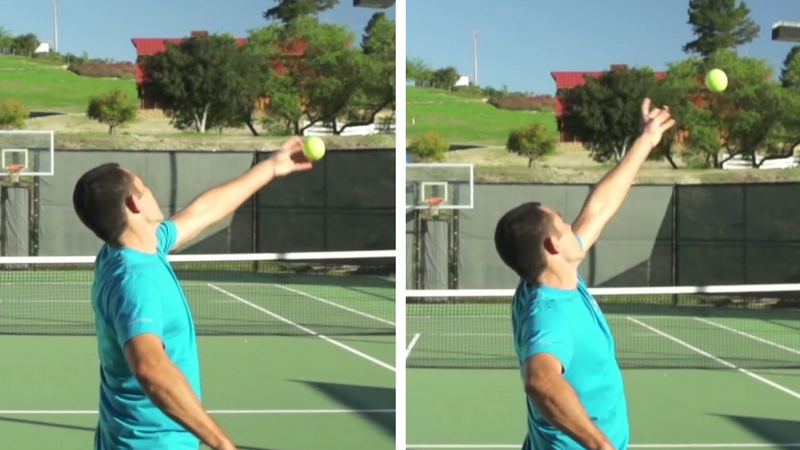 Focus on keeping the head up and eyes planted on that ball until contact.  Now your body should be moving forwards, hitting upwards  and making one hell of an impact.

Work incessantly on getting that ball toss in the same position every time.  Nerves (tightness), wind, sun can also go against you but with a toss you can rely on, you can kick those pressure points to the curb 😉

Control the height so that it’s not too tall – making timing difficult to deal with.

Make sure the toss is not too low or you won’t be able to fully extend the arm (shoulder) sacrificing power.

I see people throw a ball up so high only to let it drop too low and practically tee the serve off of their own shoulder height. What´s the point of putting up a toss at all?

I see ball tosses too far out in front, sideways, behind them, yet they go for everything!  And then wonder why they have zero confidence in their serve.

There is no limit to the number of bad tosses that a player may choose NOT to hit.

In the meantime, stop hitting bad tosses.  Keep practicing deliberate practice! You can do tossing drills on your own for free at your local court or in driveway for that matter.

Ladies pull out your graceful game and guys channel Federer here and get that ball in the air as thoughtfully as possible to begin building on your serve.  The toss is only the 1st step 🙂 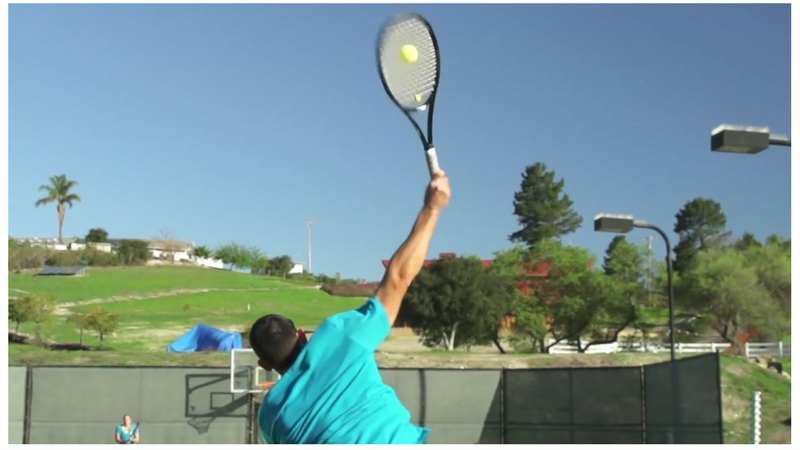 Want to play tennis with us in Spain?

Check out our dates here