The 2 Hander backhand has been around since the golden days and while the 1 hander has had a resurgence – the 2 hander still holds a ton of charm!

I hate to do this to you Lefties again but to simplify I’m going focus on right handed players.

You don’t see backhands as much as you see forehands on court. Players tend to practise their forehand more to the point that they may prefer to hit an inside out forehand only to avoid hitting a backhand, but the truth is one must hit a backhand at one point – sooner than later.

As always, recognize the incoming ball early in order to start moving into the best position possible.

Ok Players, Let’s Do This! 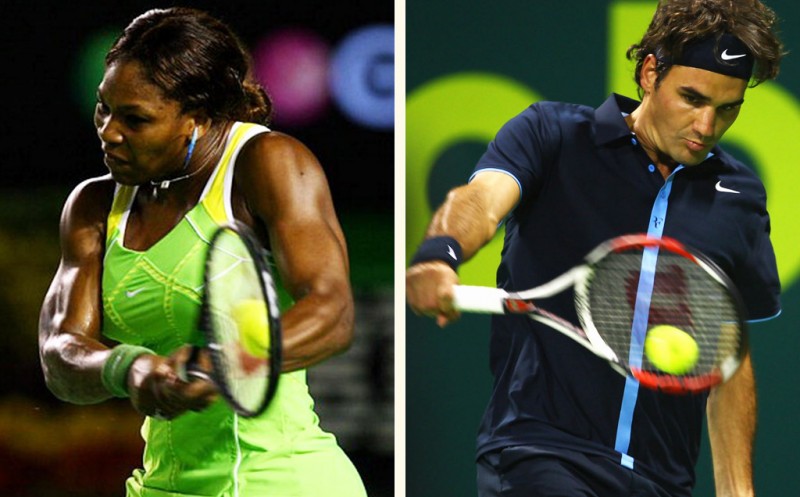 As you’re learning the game you may initially start with the 2 handed backhand because it is easier to learn than a one hander.

And for advanced players the 2 handed backhand is usually an absolute weapon most times with a one handed slice backhand used to grab balls in a balanced manner that 2 hander doesn’t allow for.

The Grip should be Continental (same as mentioned in my post about the Toss). You can also use a Double Eastern grip. Either way make sure your hands are together. They operate as a unit here. Not one at the bottom and one on the throat of the racquet, like I see many adults doing in our tennis camps.

As you recognize the incoming ball prepare by getting your shoulders & hips turned to the side of the ball. This will help in getting you a somewhat explosive release. Let’s not forget 2 handed backhands are easier to generate power! And I know how much you all want that 🙂 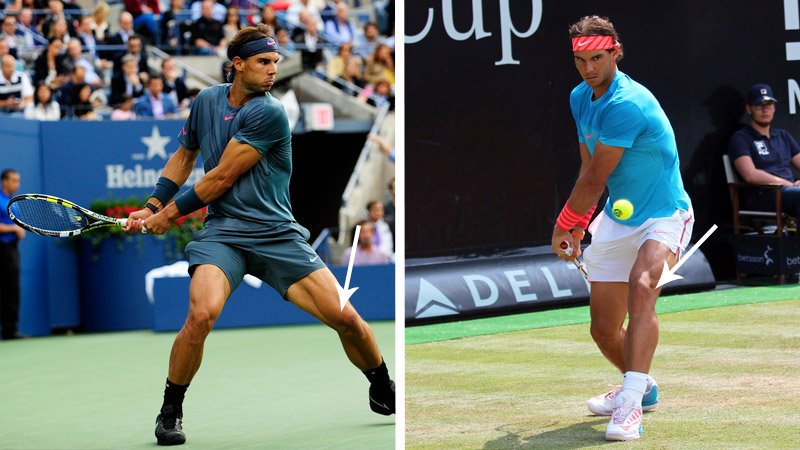 In Closed Stance (image on the right) you rotate your hips and shoulders pointing to the direction of the ball. In Open stance you only rotate the shoulders, while your hips stay facing the direction of the ball. In other words, instead of a full unit turn to the side – the body will be half open half closed.  Sounds awkward, right?  It certainly can be for most players!

The problem with Open Stance is that most players lose control over the shot, not to mention their balance. The balance on this shot can be a real bastard and open stance can screw recreational players up – royally.

Professional players these days are using the open stance backhand but it’s certainly not ideal to balance and direct the ball like in closed stance. The decision is yours, but I always advise to go for results with recreational players. And results are greater here on closed stance shots. 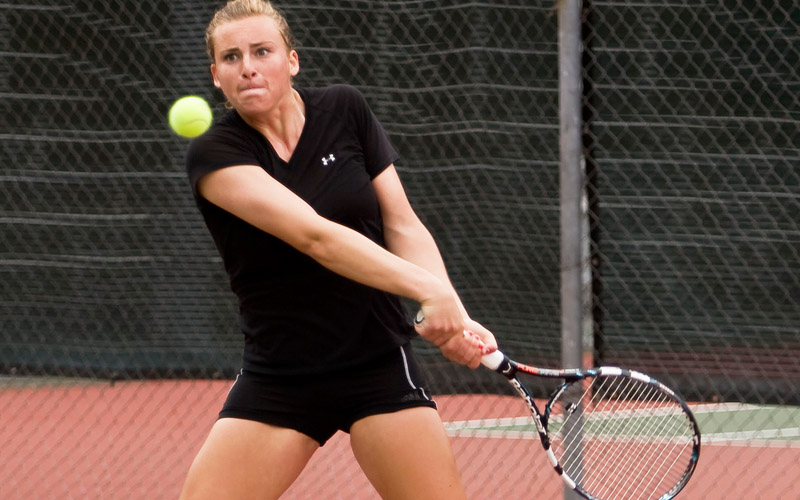 The racquet take back should be positioned with the racquet head low and you can add a slight loop (but not a loop like you’d make on your forehand)! Adding a loop or shape to the stroke helps to get the racquet head below the ball prior to contact and facilitates more topspin. Think fluid motion here.

Typically that loop or inverted C shape helps get low below the ball and allow a whole lotta wrist to come over the ball on contact, keeping the topspin sharp.

Another big problem I see is that players think they have the racquet fully back but it’s actually only pulled half way back promoting half a swing! 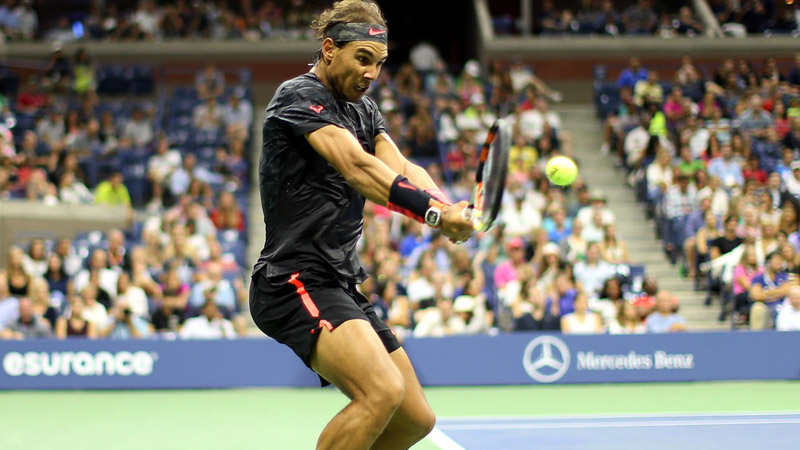 Contact will be at waist height at a comfortable distance from you depending on the grip you’ve chosen. The contact position when hitting a backhand is a bit closer to the ball than when hitting a forehand, specially for those using extreme grips on the forehand. 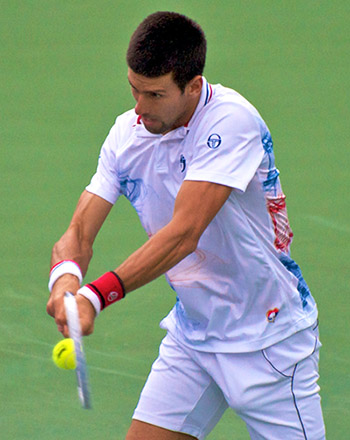 Follow through out in front approximately by your front foot (assuming you’re hitting in closed stance). If you find that on contact your elbows are jammed up into your body – just below the chest, you’re too close and can fix this by looking for a contact position further out in front.

This extension away from the body drives the ball deep into your opponent’s side of the court. Remember, long extensions not only look better but keeping the ball deep is the goal! As you advance from intermediate to advanced levels you will notice a key to your transformation is ball depth, placement and height over the net. They may come gradually but they must come. 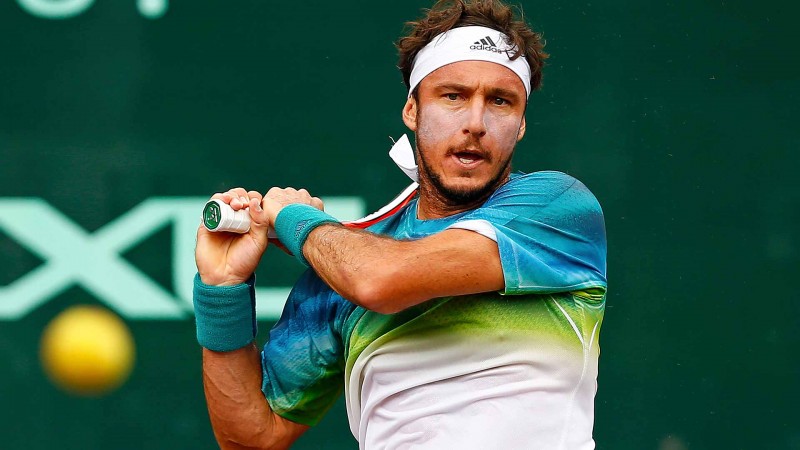 Lastly and yet again a common mistake I see from players is that at the end of the follow-through & extension the butt of the racquet should face out at your opponent. If this doesn’t happen, it means the wrist didn’t move in the correct motion for a healthy finish. This one is even trickier for the individual to check for themselves but a good eye from your coach should catch this one immediately!

As in the forehand, you should be able to almost kiss your bicep at the end of the shot.

As you hit and finish the backhand stroke – your back leg (again, assuming closed stance) may come through acting as your ‘recovery step’ for more power and balance.

At the end of this beauty – you should be squarely facing your opponent knowing you’ve found your sweet spot and it was a Bomber!

practising If you feel like practising this during your holiday we happily welcome you in Spain. In the meantime, keep up the hard work and be patient with your development.

Want to play tennis with us in spain?

Check our dates out here 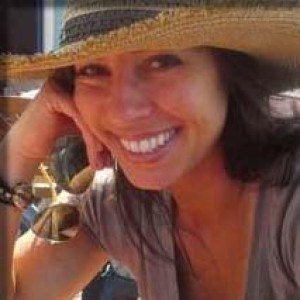