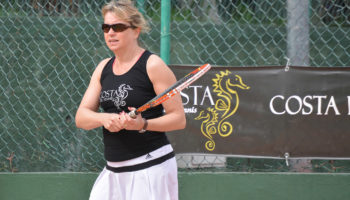 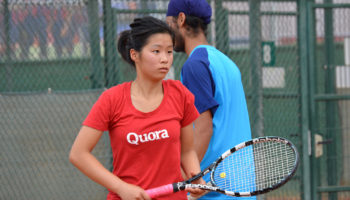 Our Tennis Holiday programs for adults include 3 hrs of tennis per day. Tennis Camps include an extra 1.5 hrs of coaching.  Tennis Vacations are just as intense as the Camps, just a little shorter.

Adults only. If younger players come along with adults, private coaching is available.

What destinations and seasons?

Barcelona from April to November and Gran Canaria (Canary Islands) from October to April. Winters are spectacular here.

As Players have suggested, a third destination in Europe is in high demand. It will be a Summer offering and most likely a Spanish destination.

How long do they last?

Tennis Holidays typically happen on set weeks including 2 hrs of coaching + 1 hr match from Monday to Friday. Adult Tennis Camps include an extra 1.5 hrs of coaching.

Our holiday programs leave free time for sightseeing which is a luxury when traveling to beautiful locations.

Camp programs can be taxing and not all players complete the training. Nor do all players choose this option, so beware you may be the only finishing that last 1.5 hrs. Many love this for the private aspect. The only drawback? It leaves less time to explore your destination.

We don’t like to work with more than 3 or 4 players per court for both tennis camps and tennis holiday program.

95% of our training hours are from 10am to 1pm, but we’ve started as early as 8 and as late as 12pm on random occasions due to seasonal conditions.

Tennis vacation packages are a popular option including great accommodation but you can also get the tennis only and find your own place to stay.

85% of our players travel alone so tennis breaks for singles are one of our most popular options.

Transportation to and from the club is included so you can stay in the center for a better off-court experience.

Most junior tennis camps in Spain include boarding. Here you will see players of all ages & abilities broken down by groups but highly international. This has added benefits as players meet people from allover the world. Friendships forge quickly and players train, eat, board and socialize together.

We have a tennis camp in Barcelona only offered the month of July for juniors is in a private arena in Barcelona’s center. This offering is atypical and here’s why!?

Coaches or parents chaperone players and players train with Spanish players from morning until late afternoon – 5.5 hrs total with use of the pool, fields, facility. Host families are also offered for further Spanish language immersion with other local player families of similar age / gender. During the training week Monday – Friday is a National tournament for points where kids are entered & inscribed as part of the week and they get pulled from daily training to compete until eliminated from their division. Our coaches chaperone players to & from this Cataluña tournament held at different locations throughout Barcelona.

Parents typically like to accompany the player to visit the destination as well as see their child player compete. It’s a very interesting family experience.

It is set in the center of Mallorca, fully chaperoned with junior players of all ages & abilities living or visiting the academy year round with the hopes of becoming professional tennis players or a plan B of college tennis in the USA.

There are just 5 clay courts & a total of 23 boarding spots available.

Court ratios are kept impeccably small with the beautiful beaches of Mallorca utilized for further physical training. There are no typical breaks as the work ethic is fierce! And the benches just for show.

Discipline is high and kids independent as they arrive to meals, training and doing laundry on their own. Internet activity regulated and respect for others paramount here as players train to be the very best!

Traveling to Mallorca for a week, month or more? We offer you 2 hours private lessons per week on us.

Any cookies that may not be particularly necessary for the website to function and is used specifically to collect user personal data via analytics, ads, other embedded contents are termed as non-necessary cookies. It is mandatory to procure user consent prior to running these cookies on your website.