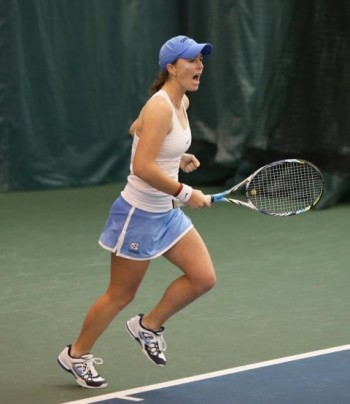 A mild mannered Clark Kent – until she strikes a ball! I first caught onto this hotshot as she was clinching match wins for UNC’s amazing & historical victory in ITA’s National Team Indoor Championships. I was amazed at the poise of freshman, Whitney Kay.

When I checked her out further, I learned she had one hell of a junior run (including 10 Gold balls, 8 silver balls and a #1 spot in the Nation in 2010.) So it didn’t surprise me she was considered a Blue Chip by Tennisrecruiting.net.

Not only did she sign with UNC, she did what most Blue Chip prospects are expected to do…she made an immediate impact. In February’s ITA National Team Indoor Championship it was Whitney’s win against (UCLA’s senior) Pamela Montez that sealed the Tar Heel victory.

Prior to Montez she had successful singles wins against USC and Duke – again, no easy feats! Grinding out one point at a time with resiliency and focus led her into the arms of her euphoric teammates as well as UNC’s championship legacy.

Shortly afterwards she received the ACC Player of the Week award.

Personally we dig hearing about great sportsmanship awards and Whitney has those too -and we love her for that!   You could undoubtedly say, “it’s good to be Whitney Kay.”

Costa: What in the world did that final match point win against (UCLA’s) Pamela Montez feel like when you won the tiebreaker & UNC clinched the title!!!?? 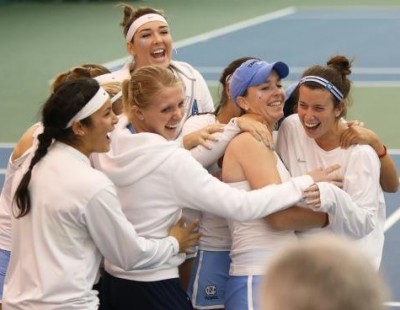 Whitney: It’s really hard to describe exactly what I was feeling at the moment when I won the tiebreaker that meant my team won the national title…all I can say is that it was definitely one of the best moments I’ve ever had.

It’s a great feeling being able to pull out a match like that for your teammates, coaches, and university; especially when it was for the first National title for our school.

One thing I have to say though is that I couldn’t have done it without my teammates, and while I may have won the last point for our team it never would have happened without every other person on the team.

Costa: As a freshman you are having an incredible first year…are you loving the team experience over your amazing junior run?

Whitney: So far my college tennis experience with having a team just cannot compare to my junior career. I almost feel like my junior career doesn’t even matter anymore, it just can’t match up to what it feels like to be on a team. It’s just so different being able to play for my teammates and coaches instead of just for myself. To say that I am loving this team experience so far would be quite the understatement.

Costa: It may be a premature, but do you think about the Pro tour after college?

Whitney: You know, I’ve given the pros some thought in the past, I’ve thought about whether or not it would be something I would want to do. In the end my answer is usually the same, I want to just play college tennis for now and enjoy it, and after my four years I’ll see where I’m at and how I’m doing and go from there. It’s definitely something I would consider doing though.

Costa: As a Blue Chip prospect you could have chosen any school, why UNC? 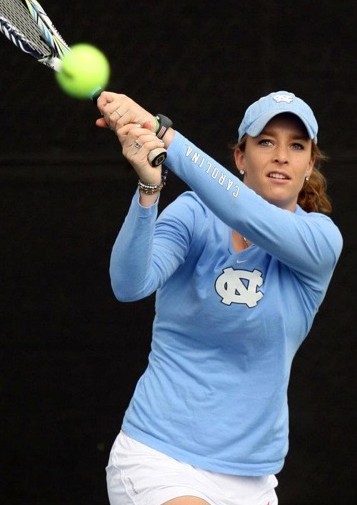 I visited something like 20 different schools with my brother and there were only a few that really stuck out to me, and UNC was obviously one of them.

UNC was the only school I visited more than once, and it took me three visits to commit to UNC because I wanted to be one hundred percent sure, but on my third visit I knew it was exactly where I was meant to be, and where I wanted to be.

To get back to the question, I feel like everything about UNC made it special and made it the place for me, but the thing that made the decision easy was the coaches, Brian Kalbas and Sara Anundsen. Every time I talked to them they were just so great and genuinely seemed to care about me and my future. They really showed interest in me and made me feel like I was really wanted at UNC, and at the end of the day that was exactly what I was looking for and what I needed, and they made my decision simple and easy.

Costa: How are you adapting to juggling school, tennis, travel & friends at UNC?

Whitney: College is hard, you have to learn how to balance school, tennis, travel, and a little bit of a social life. You don’t have your parents there telling you to get your homework done, so the motivation has to come from inside. Fortunately for me I was used to traveling a lot for tennis and I had to learn how to get my school work done on the road; since I was home schooled it was easier than if I had gone to school. 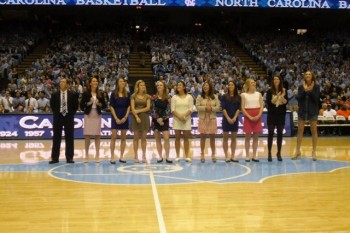 I think that so far the hardest thing about being in college has been getting used to tougher classes, teachers, and exams.

For my home school program we had exams but there weren’t as many and they weren’t worth nearly as much of my grade as they are now in college. For a lot of classes you HAVE to get a good grade on the exams because there is no homework for the class to help you out if you get a bad grade on the exam.
My first semester at UNC was definitely what I would call “rough.” I took some hard classes and I had to relearn how to study for them and it really didn’t go as well as I had hoped. But, so far this second semester is going much more smoothly and hopefully each semester will just keep getting better.

Costa: I know the Tar Heel girls did San Diego for Spring Break this year, how was the competition? What’d you girls do for fun in SD?

Whitney: Spring Break in San Diego with the team was a great thing for us.
We played a match against Texas Tech and we won 5-2. It was a pretty competitive match, we lost the doubles point so we started out down and had to fight our way back in it and get the majority of the singles matches.

Texas Tech had a lot of fight and athleticism in them, it wasn’t an easy, guaranteed, win.

After the match we had a day and a half left to do something fun.

Some of the girls hung out by the pool, some went shopping, and some just went for a walk on the beach.

On our last full day there we all went to Sea World and had a blast! It was great to be able to do something like that as a team, those things help bring us closer.

Costa: Being from the South there’s a good amount of clay courts? Have you played the red clay? 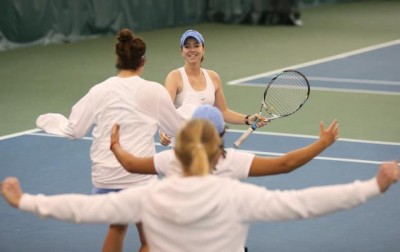 Whitney: It’s funny, you would think that I would have grown up playing on clay being in the South with our climate, but I really didn’t play much on it.

There aren’t that many clay courts around my area in Atlanta to hit on.

It was hard to find a reason to hit on the few clay courts there were anyway because throughout the year we had only maybe three or four clay court tournaments to play.

I did train in Hilton Head at Smith Stearns for about three months when I was 14 and it was mostly on clay so I learned to LOVE the surface.